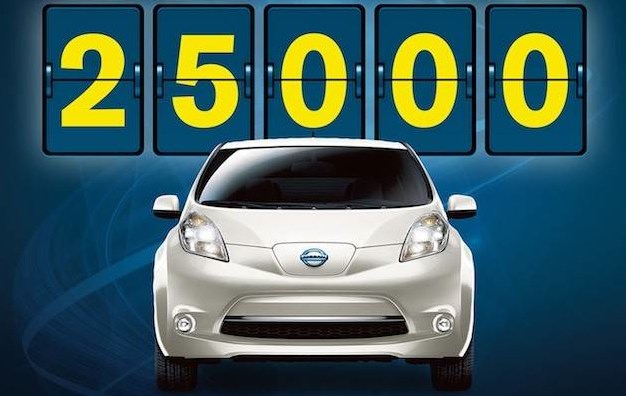 We’ll forgive Nissan for gloating a bit, now that the Japanese automaker has surpassed the 25,000- sales threshold for the Leaf EV in the US.

Coming off two of its best months domestically, the all-electric Leaf has complemented its sales on the West Coast with more recent demand increases in markets such as Atlanta, Dallas and Chicago. All told, Nissan, which recently started producing US Leafs at its Tennessee plant, has sold 62,000 Leafs globally.

With production moving stateside, Nissan was able to cut the price of the 2013 Leaf by $6,400 to a base of $28,800, and that’s before the $7,500 federal tax credit kicks in. Through April, Nissan more than doubled year-earlier Leaf sales to 5,476 units. And the model recently received an additional boost when the US Environmental Protection Agency (EPA) confirmed its new fuel economy rating for the Leaf at 115 miles per gallon equivalent, up from 99 MPGe. Check out Nissan’s press release below.