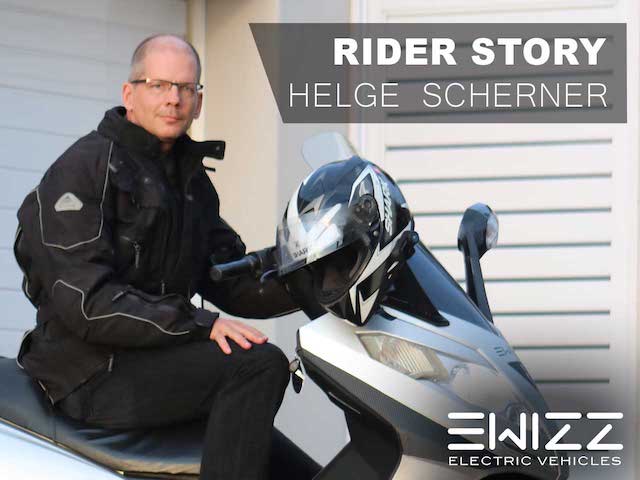 Hi there. My name is Helge and this is my electric journey.

As in every big city, traffic is becoming more congested and Cape Town is certainly no exception. I became increasingly frustrated with the daily rush hour. I was also witnessing an increase in people making use of motorcycles and scooters. It made logical sense. But I had no interest in becoming a motorcyclist, I just wanted an efficient way to commute and run errands.

I became increasingly frustrated with the daily rush hour….But I had no interest in becoming a motorcyclist

My criteria where the following:

After a bit of research, I discovered that there were only two brands available on the SA market: Zero Motorcycles out of the US and EWIZZ Electric Vehicles, who import their scooters from China.

Zero’s looked awesome but came with a significant investment of R 200,000 plus. Since they are Motorcycles as opposed to Scooters, they offered loads in terms of performance but little in terms of the practically and weather protection I was looking for.

So, in April 2017, I put down a deposit on an EWIZZ Lightning 9 electric scooter, with a 5.7 kWh LINCM battery, a top speed of 115 kmh and a range of around 125km. The 700w onboard charger would be able to fill her up from empty in 9 hours. I paid a little extra for the LED headlight option for a total R 86 932.99. The Lightning is the most powerful scooter EWIZZ have to offer. If you do not require highway speeds, smaller scooters are available.

There were some complications before I could take delivery. Due to new regulations in China with regards the shipping of Lithium batteries and battery packs, the container with my new scooter was delayed and delayed. Eventually Andy @ EWIZZ and I agreed on a new plan. I would receive the 2013 Lightning 9 F72 scooter that was available as a Demo, but with new long life batteries LiFEPO4, a new controller and a 1.5kw 4 hour fast charger and in November 2017, I took delivery.

The scooter is VERY easy to ride. It’s not a light bike at around 177 kg but it has nimble steering and a very low center of gravity. Since it has a hub motor, there is no gearbox. A traditional twist -throttle on the right, a set of brake levers and switches for lights and indicators. The acceleration is very good, about what you would expect from a 300cc scooter and since you have 100% torque available from 0 revs, the acceleration curve is completely linear all the way to top speed at 100 kmh plus. I find myself backing off the throttle from about 35 kmh as I would be over the speed limit in no time at all.

I charge the bike at work most of the time. It’s a 72km round trip from work to home and back and I usually have about 30-40% of range left. It takes around 4 hours to charge to 100% from that. Even after 18 months of use, I have not seen a reduction in range, i.e. battery capacity. Differences in range over the same route seem rather due to riding style (full throttle will drain the batteries quickly) and changes in wind conditions.

The bike is completely silent. It’s something to be aware of at low speeds and when pedestrians and cyclist are about. They will not HEAR you coming. But the bike’s hooter is sufficient to make same people take their eyes off their cell phone. I also ride with the lights on 100% of the time, just to make sure I get noticed. The lack of engine noise doesn’t seem to be an issue at high speeds. From experience I know that you will only HEAR a motorbike overtaking you at 100 kmh plus, when he’s already past you.

The bike has regenerative breaking, which means that if you pull a brake lever slightly, the motor is used for braking and acts like a generator, charging the batteries. I’ve become quite adept using this feature for most of my braking needs.

The large fairing offers decent protection from wind and rain. Riding the bike in strong wind does take some getting used to, but the low centre of gravity helps. But one does get pummelled and buffeted at highway speeds with a strong SE crosswind along the N1 near Century City and Woodstock. The trick is to relax and try to anticipate the gusts by leaning into them ever so lightly…

I made some additional investments into gear, which I would recommend:

So, it’s been 18 months since I have started riding the Lightning. During that time, I have clocked up 21 000 km, about 290 km a week. I very seldom use my car for my trip to work or to run errands. It was a surprise how much fun it is to ride a motorcycle. I had assumed that this would wear off, but I still look forward to climbing on every morning and every afternoon.

I often get asked about the dangers of riding in traffic. Luckily, I have had very little negative experiences. Yes, you must ride carefully and defensively, but in my experience, the few “dicey” situations I have encountered have been caused by yours truly. Motorcycles lend themselves to be ridden recklessly, with their small footprint and instant acceleration. No gap appears to be too small, yet sometimes it is. I have to consistently and consciously remind myself to ride safely, not to take the gap and to be patient.

Yes, you must ride carefully and defensively, but in my experience, the few “dicey” situations I have encountered have been caused by yours truly

To this effect I have imposed some self-imposed traffic rules:

Any negative feedback? Very little actually. There was an issue last year, where the current sensor on the bike gave incorrect readings to the bike’s computer, which resulted in rather strange range indicator readings. Turned out that the plug on the sensor was loose – an easy fix for Andy @ EWIZZ.

There was also an issue with the steering bearing having been set too tightly initially, which resulted in the steering becoming a bit sticky. EWIZZ swopped out the bearing free of charge and set it up a little looser: problem solved.

The regeneration switches are incorporated into the brake levers and not very resistant to water. When I get caught in some rain and feel the regen switching on whilst I am riding WITHOUT touching the brake levers; it’s just some moisture ingress into the switches. Since you can manually deactivate regen with a switch on the handle bar, I just ride without regen until the bike is dry again (bearing in mind that your braking will feel more sluggish. It’s amazing how quickly you became reliant on the regen braking). I also switch the regen option off on steep hill starts. With regen ON, the throttle is switched off when you are on the brakes, which makes hill starts without rolling back impossible… Again, it’s something you become used to quite quickly and the lever switch is in the middle of the handle bar – easy to operate even with winter gloves.

It’s a scooter made in China. So, don’t expect super high levels of finishing… There’s a little creaking and rattling of body panels. The suspension seems adequate. With the motor in the rear hub, there’s a significant amount of un-sprung weight, but it’s ok. Bearing in mind that I have nothing to compare this to, since I’ve not spent any amount of time on other motorcycles.

Whereas initially I did suffer from range-anxiety, it’s something you get used to quickly and you know what sort of range/trips you can do. If you know that you’re doing a more than the usual just plan ahead a little. For example the other day I had to be at my child’s school at 10h00 which was back in town, so that days’ trips would look like: ride to work (36km), ride back to town (35km) and back to work (35km) and then back home in the evening. With insufficient time to charge at work, I simply charged to 100% at home over night, topped up when I got to work (with still 75% available) and had ample range to go to school and back to work and re-charge to 100% before leaving for home again.

Whereas initially I did suffer from range-anxiety, it’s something you get used to quickly and you know what sort of range/trips you can do.

The bike came in all silver. At some point a had lost a cover on the mirror (which covers some cable connectors) so decided to replace both – they are only available in black and would have to be painted to match. I quite liked the black and later played with some carbon-look vinyl to accentuate some of the body lines.

All in all: this is the perfect commuter motorcycle. Very little maintenance (service intervals are every 12 months for EWIZZ to balance the battery cells, check on brakes and tighten some loose screws. Cost around R700), easy to use with good weather protection and enough storage space for some shopping/groceries and VERY low running costs.

I am surprised that not more people leave their cars in the garage and have a lot less stress in traffic. I maintain, riding a motorbike is fun!