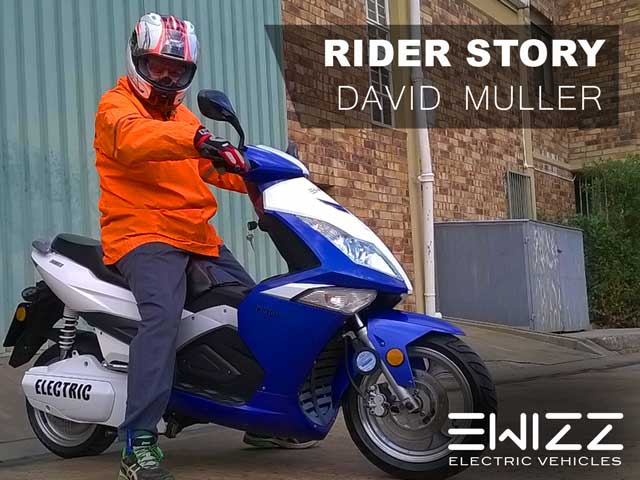 Look right, look left but since owning my EWIZZ electric scooter I have never looked back 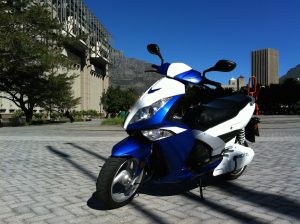 At seven thirty one morning having already brushed my teeth using a mug to save water, ate an apple, some nuts, having downed a glass of diluted juice to keep healthy I headed off for work. Outside the sun had been up since about five thirty; it was the beginning of summer. It was a busy road, all 20 km to work. But, as my friends would say, think of it as playing in the traffic. Rush hour is a misnomer; hardly anything on the road goes much faster than 40 kph. I joined rush hour in Muizenberg, along M5 on to N2 then M3, trickling up round hospital bend below Devil’s Peak, leaving De Waal Drive into Roland Avenue down to the City bowl. You can imagine the bumper to bumper, stop start first hour of my day. Although the air had warmed up and the sun was already baking the tarmac a cool breeze from the sea cooled brought comfort. It was in fact, a fine day. As usual traffic was heavy from the outset. Not half way to work and I had to slow to a crawl. However I still enjoyed the freshness of a new day. No stress. Fortunately no roadworks slowing us down to stop/go situations; Cape Town is quite religious at keeping potholes to a minimum. 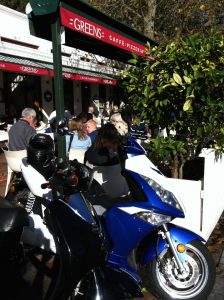 There were many stop/starts though as vehicles jostled for position. Someone should change the name to Snail’s hour. Ah well, it is as it is this ‘playing’ in the traffic; I kept a positive frame of mind. After all, the vehicles will start thinning out as we approach the city centre. No real worries, we were all moving forward… like lemmings. Well almost. Physically I was feeling exhilarated. I felt…different; I felt at peace with how things were moving that morning. I mean think about it, we, you and I, will slowly win and decrease our carbon footprint, won’t we? It may take time, but as an early adopter I sense more and more of you will want to join me as I ease my scooter between those vehicles. One of them takes up as much space as four of my form of transport. Gee, think of the land we could save each morning, in each city around the world? And, lack of emissions from my scooter, it’s electric: state of the art technology. What about those toxic fumes pouring into the atmosphere from these antiquated combustion engines? Not much has evolved from way back in the early 1900’s during Einstein’s time when there were more electric vehicles on the road than petrol driven ‘wasters’? When your motor car runs out of fuel every 500 to 800 km where do you go? 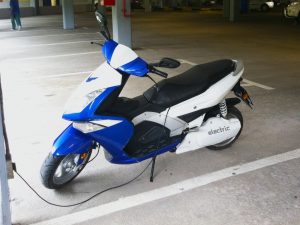 Did you know that the fuel cost of running your average 4-wheeled vehicle for one month will keep my electric scooter fueled for 3 years? And all I do when ‘filling’ her up is plug her into the wall like one plugs a kettle in to boil. A few hours and I’m ready to rock ‘n roll again. Ready to enjoy the fresh air; no wonder I arrive at work stress free each morning. As I park her for a charge at Bean There Coffee Shop in Wale Street or in the underground parking area on the Waterfront my digital readout reminds me my scooter is due for a service. The word may conjure up a whole day or two in the local mechanical shop; a few thousand rands for exchange of oil, oil filters, pollen filters, air filter, 16 time units of labour. Aha, servicing a electric scooter like mine which has very few moving parts requires only a diagnostic test and checks on brakes, tyres and bearings no messy oil changes.

My last service Andy tightened a few nuts, looked at the rather unworn tyres and made sure the brakes were good for another 10 thousand km called me down from his office where I was enjoying a cuppa coffee, invoiced me for less than R500 then waved me goodbye. My electric two wheeler does the same job as the space-hogging toxic fume-emitting fuel-guzzler vehicle so many of us sit in trying to get to work 5 days a week 45 weeks a year. Be the change you want: get an electric scooter. Don’t you want your children to be proud of you? Don’t you want your children to live on a sustainable planet, one which is spacious, clean and clear of all those toxic fumes all those cars are feeding into the atmosphere? Oh, I could go on until you say, “Enough now, I’ll go and buy one.”

Just before you do, add the below to the plusses not yet mentioned:

Can’t wait to go for a ride, coming?

2 Responses to "Rider story – Look right, look left but since owning my EWIZZ electric scooter I have never looked back by David Muller"